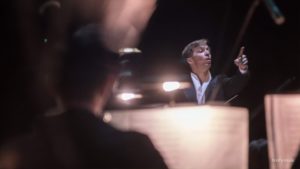 Conducted the orchestra version of Carmina Burana at the Teatro Verdi of Padua and at the Palazzo Ducale of Revere in Mantova;  La ServaPadrona at Palazzo Zuckerman of Padova;  La Traviata at Pyeongtaek Art Center;Jinju Art Center in South Korea;  performing I’Elisir d’amore by Donizetti in The Theatres of Padova and Bassanodel Grappa in Italy;  La Cambiale di Matrimonio by Rossini at Teatro Argentino de La Plata in Argentina;  II Barbiere di Siviglia in the Theatres of Padova and Bassano del Grappa in Italy.

Collaborated as artistic director with associations and municipalities such asArtes Italia,Monselice,Selvazzano Dentro and Montegrotto Terme.  Nicola is also the artistic director of theInternational Lyric Academy of Padova, Italy.

Lectured about 17th Century Venetian Choral Music at the NationalAcademy of Music in Minsk, Belarus and has given masterclasses for Choir in:  the Provincia de Buenos Aires in Argentina;  the Gyeongsang National University and the IksanMusical High School, both in Korea.

Currently serving as the primary professor of Formation Musicale and orchestra conductor in the Conservatoire Départmental of Nîmes, France.

The opera convinces on a musical level with the conductor Simoni ... the conductor, Nicola Simoni, at the helm of the orchestra of Padua and Veneto has firmly held the line of the musical part promoting a toned and expressive performance. " Giornale di Vicenza 7/08/2019